Farmers Insurance naming rights deal is a ‘WIN-WIN’ for sponsor

Earlier this week, AEG announced the largest naming rights deal in history giving Farmers Insurance entitlement to the proposed downtown LA multipurpose football stadium.  The deal is a reported $700 million over 30 years and is being positioned as the key leverage point to bringing a NFL team back to LA.  This definitely seems to be a “cart before the horse” situation, but it makes you wonder how this unprecedented deal is structured and what impact it will have for Farmers if and when it ever happens. 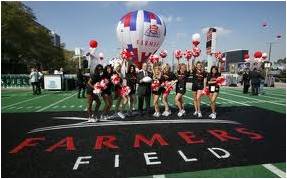 The press conference held yesterday included the who’s who of LA sports, city officials and business leaders.  Magic Johnson, Jerry West, Eli Broad, Al Michaels, Mayor Villaraigosa and many others took part either in person or via pre-recorded video messages.  The media coverage alone both on a local and national level gave Farmers a ton of exposure.  Stories ran in the Wall Street Journal, ESPN, Huffington Post and of course the LA Times to name a few.   This reinforces Farmers place as a LA based company and positions them as a major factor to LA getting professional football back. 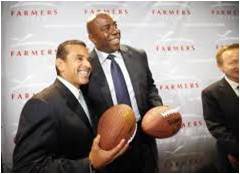 Outside of NASCAR or Olympic sports, many fans fail to make the connection between a sponsor’s involvement with a team and the ability for the team to succeed.  In this case, it will be very clear to even a casual fan or observer that Farmer’s sponsorship will enable LA to get a football team.  The stadium project is also being touted as “taxpayer free” and a substantial job creator, which again is a benefit of Farmer’s investment.  If this project does come to fruition, the fans and city will feel a debt of gratitude to Farmers along with an affinity to use their products and services.

If the deal doesn’t happen for some reason, whether it be the NFL not granting LA a team or city politics getting in the way, Farmer’s will have already generated tremendous good will and received millions of impressions.  Every news story, interview or coverage from this point forward will mention Farmers as the naming rights sponsor.  The big question is whether Farmers is on the hook for any upfront money regardless of what happens or do they not write a check until this is officially green lit by all parties necessary (e.g. NFL, city, etc.).  The stadium is slated to open in 2015, which gives this at least a 4 year incubation and possibly longer if things are dragged out.  Granted there will be limitations on what Farmers can do in regards to activation during this building phase.  However, this could be a PR dream if handled the right way.  It should be a ‘Win-Win’ either way.