The rapid growth of social media is old news by now. However, in sports, using this medium in a productive and meaningful way still may be intimidating and foreign to many.

The NBA’s number of Facebook fans is almost triple what the NFL’s is, and yet pro football dominates TV ratings and overall popularity. The L.A. Lakers lead U.S. teams with more than 5.6 million Facebook fans. Meanwhile, the New York Knicks, who play in the No. 1 media market and were recently ranked atop the Lakers on the Forbes NBA team values list, have fewer than 400,000. 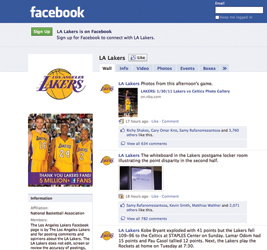 The total number of Facebook fans or Twitter followers is not a lone indicator, but it does help illustrate the gap. Some properties are taking chances, others are dipping their toes in the water, and many are waiting on the sidelines.

The NHL and its teams are aggressively utilizing social media. This is not surprising when you consider hockey’s younger, more tech-savvy fan base. The Guardian 30 Match-Up, where fans voted on Facebook throughout the month of January for newly created team superheroes, is a great example of how to appeal to younger fans while generating interest leading up to the All-Star Game, where the 30 characters were showcased. 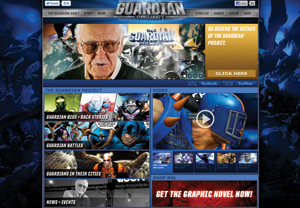 The Los Angeles Kings ran a promotion called “50,000 Strong.”In addition to increasing their exposure on Facebook, the campaign included a sweepstakes overlay. Fans were encouraged to list the Kings as their favorite team on their profile page. Once the Kings reached their goal of 50,000, one lucky fan was selected to win a VIP ticket package, autographed jersey and a meet-and-greet with team President Luc Robitaille.

Other factors clearly played a role in the successful ratings, including the switch to a prime-time airing because of the weather and the HBO “24/7” show in the weeks leading up to the game. In addition to generating a positive TV rating, in the two weeks between Dec. 29 and Jan. 11, the NHL’s total number of Facebook fans increased by more than 50,000 and Twitter followers by approximately 11,000.

These numbers may seem arbitrary and are not as easily quantified as TV ratings in terms of dollar value. What is a Facebook fan or Twitter follower worth to a team or a brand? Typically, online media is measured and purchased by impressions, but placing a monetary value against a fan on Facebook is elusive. We may not be able to answer this yet, but we do know social media provides a vehicle to reach and interact with consumers. It allows fans to take ownership by becoming personally vested while at the same time helping spread the word to their network.
Every team owns a Facebook page and Twitter account, but how properties utilize these assets and communicate with their fans will separate the leaders from the pack.

Sheer volume of Facebook fans may just be a byproduct of a team’s popularity, but what are they doing to engage these fans besides game recaps, injury updates, etc.? The quality of interaction, feedback from fans and influencing behavior will be the ultimate measurement.

For those who are reluctant, the best thing to do is to jump in and get immersed in this space. Look at what other teams and brands are doing. Many are hiring full-time personnel, such as a director or manager of new media, to oversee this endeavor.

There are probably several younger staff members at every organization, regardless of what department they work in, who could be a valuable resource. Social media is most likely second nature to them and a big part of their everyday lives.

If sponsors are not asking for social media assets already, they soon will be. There is tremendous value here, but don’t look to nickel and dime them on this. In some cases, they may be much further ahead in their efforts and could provide reciprocal support to the team. Brands such as Coca-Cola (22 million) and Red Bull (15 million) have millions of “likes” on Facebook.

Open the dialogue by asking sponsors what they are doing and find ways for integration. Make social media a major piece of a sponsor promotion in addition to the usual TV or radio drop-ins. Create a post and link to a sponsor sweepstakes from the team Facebook page or send out a tweet informing fans about a player appearance at a retail partner. It’s pretty simple, doesn’t cost anything and will go a long way.

For team marketers, ask fans for feedback about events, promotions and in-stadium experiences. Teams are often afraid of receiving negative comments for the public to see. However, social media provides an opportunity to respond and show someone is listening. Be part of the conversation, offer a solution and you may even change someone’s opinion. This can become a team’s instant exit poll or customer survey.

This is a great time to be creative, progressive and expansive in your efforts. At a minimum, you can learn more about your fans or customers. Most importantly, you can create a one-to-one connection and hear what they are saying. The risk should be minimal, and by doing nothing you may be left behind.

Jason Klein () is the founder of 88 Marketing and an adjunct professor for the University of San Francisco sports management program. Follow him on Twitter @88marketing.