As the NBA All-Star weekend came to a close Sunday night one thing stuck in my mind, the NBA still owns “cool”.  When compared to its counterparts at the NFL, MLB and NHL, the NBA is by far the most dialed in to pop culture.  LA playing host certainly added to this year’s All-Star bash, but regardless of what city the game is played the NBA knows how to entertain.  Yes the All-Star events may be somewhat contrived and overhyped at times, but each year it manages to capture our attention. 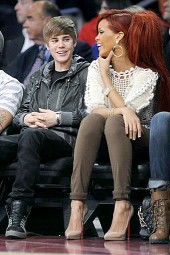 The music, A-list celebs and the athletes themselves all contribute to the hip factor of the NBA’s All-Star weekend.  It seemed like the Oscars, Grammy’s, Fashion Week and hoops all rolled into one.  Jay-Z, Beyonce, Rihanna, Kanye, Bieber, Diddy, Legend, Kravitz, Wahlberg and of course Jack topped the list of impressive talent in the building.  Other sports may try to appeal to a younger audience and be relevant, but just treading out some top twenty band at halftime doesn’t cut it and networks strategically placing their actors to promote the latest sitcom is blatantly obvious.

The game itself is nothing more than glorified pickup ball with the world’s greatest players.  There is little to no defense until the last couple of minutes when these ultra competitive athletes’ pride kicks in and they go for the win.  From a pure competition standpoint baseball’s All-Star game is the closest thing to an actual game.  The pitchers are throwing their best stuff to hitters who are trying to get on base against defenders who are striving to make a good play.  There are also real implications as the winning league gets home field advantage in the World Series.  The fear of injury is minimal unlike the NFL, NHL and NBA so the players actually give it their best.  What regular season basketball game is 148 to 143 or how about an 11 to 10 hockey score?  With all this being said, I’ve been hooked on the NBA All-Star weekend since the days of Jordan and Dominique dueling it out in the dunk contest in the late eighties.

The NBA sponsors got their bang for their buck with the State Farm All-Star Saturday earning the highest ratings in its 26 year history.  The main event on Sunday grew 37% over 2010 and was the most watched since 2003 (Jordan’s last game).  Blake Griffin’s dunk over a Kia Optima scored huge marketing points while apparel companies Adidas and Nike rolled out their new line of gear.  Those neon shoes and crazy socks looked ridiculous, but I already saw several guys wearing them at the gym the day after the game.

I’m not sure if it is the same in other cities, but going to any Lakers game here in LA is just cool and is always a hot ticket.  Granted most fans in attendance may not appreciate a good outlet pass or help defense, but they do know where Jack always sits and where to go for post game drinks.  As a basketball purest sometimes it’s a little irritating, but it is the Lake Show and not Hoosiers.  Sixteen championship seasons doesn’t hurt either.  Everyone loves a winner and winning is cool too.