The latest in Social Media Activation

Social media is the new frontier for sports properties and sponsors alike.  As we continue to learn how to utilize this medium, the landscape is evolving at a rapid pace.  Although direct revenue generation may still be elusive, social media is also quickly becoming the activation tool of choice.  It allows for engagement, consumer feedback, viral spreading and the ability to reach fans on their terms.  Here are several strong examples currently underway worth looking at. 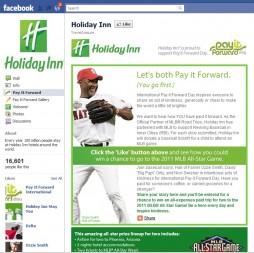 Holiday Inn is piggybacking onto the international “Pay It Forward Day” campaign in support of their league partnership with MLB and self proclaimed status as “Official Partner of Road Trips”.  Fans are asked to submit acts of kindness such as carrying someone’s groceries, opening a door or buying a stranger a cup of coffee on the Holiday Inn Facebook page and are automatically entered for a chance to win a trip for two to the 2011 MLB All-Star game in Phoenix.  For every submission, Holiday Inn donates a ticket for a youth participant in MLB’s Reviving Baseball in Inner Cities (RBI) program to attend a MLB game.  Hall of Famer Ozzie Smith is the official spokesman for the campaign and is featured in the creative.  There is also a call out for fans looking to book a road trip along with a special discount code provided and link to the Holiday Inn booking site.  There are close to 22,500 likes and counting so far on Facebook.  http://www.facebook.com/HolidayInnHotels 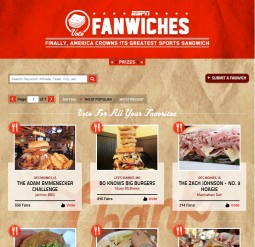 The ESPN FANWICHES campaign is taking health concerns to a new level.  This multi-media campaign is driving visitors to a dedicated page on Facebook where they are able to submit, review and vote on sandwiches named after athletes from around the country.  The grand prize is a trip to the ESPN headquarters in Bristol, CT where the winning item will be featured in the cafeteria.  Secondary prizes include $50 off in the ESPN.com shop.  The ability for fans to post pictures along with their submissions makes this a social media homerun.  This is also a brilliant move by ESPN to generate unique content without the need for team logos, game highlights or talent.  This is all about the fans and the food.  It’s surprising to not see a sponsor attached, but nonetheless this is still a great promotion.  The likes of Prevacid, Tums and Pepto Bismo should be lining up when you look at some of the submissions.  A favorite so far is the Bo Knows Big Burgers from Stuey McBrews in Lee’s Summit, MO featuring 4 pieces of Texas Toast, 3 half lb burgers, 6 strips of bacon, 1 fried egg, American, Cheddar and Pepper Jack cheese, onion, lettuce, pickle, tomato, ketchup, mustard and mayo all topped with 6 onion rings.  http://www.facebook.com/ESPN 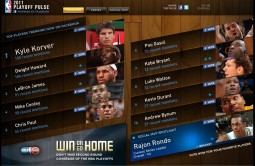 The NBA’s 2011 Pulse of the Postseason powered by Facebook is yet another example of how the league and its TV partners are utilizing social media to engage the fans and give them a voice throughout the playoffs.  Fans are able to see how players are trending across Facebook (measured by mentions) and encouraged to vote on the “Social MVP”.  Video, photos and news items related to each player and series are conveniently placed for fans to view and share via posting on their Facebook page.  The on-air schedule is readily available to promote viewership along with links to become a NBA follower on Twitter or fan on Facebook.  Updates and promotional plugs are running throughout the coverage on both TNT and ESPN. http://playoffpulse2011.nba.com/

The common denominator with all three of these examples happens to be Facebook.  However, properties and sponsors are also using other social media platforms such as Twitter and Foursquare to support their efforts.  In these three cases Facebook is the engine while Twitter along with other digital and traditional media is the fuel.  For now Facebook is the destination of choice.  With close to 600 million users and the accompanied behavioral patterns, it makes sense.  According to Nielsen, the average Facebook user spends 7 hours per month visiting the site.  Following this trend, advertisers continue to direct more money Facebook’s way with projections of over $4 billion in ad revenue for 2011 according to eMarketer.  Whereas Facebook may be the ideal destination for a brand or property to host content, Twitter is a powerful tool to disseminate information and spread the word.  A Tweet to support a campaign or promotion has replaced the email blast.  It also provides a voice and feedback from the fans or consumers.  In either case, people are using Facebook and Twitter as a jumping off point to visit other sites.

This is an exciting time to explore new ways to communicate and engage fans while supporting marketing initiatives.  There is no need to abandon traditional methods, but social media should be an essential part of the mix.  The risk adverse among us may still want to take a wait and see approach before experimenting in this space outside of the basics.  However, those who are embracing this opportunity will lead the way and have a huge head start.