He probably won’t remember July 6, 2011, but I will cherish it for the rest of my life.  On this day Derek Gibson Klein (2 and a half) 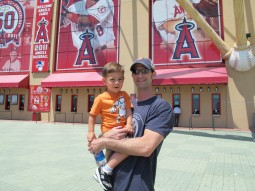 attended his first big league baseball game with his mom and dad.  The stars aligned perfectly as my hometown Detroit Tigers played in Anaheim for a 12:35 day game.  Fortunately (or unfortunately some days) Derek recently gave up his nap so no need to worry about sleep deprivation.  We packed up the diaper bag with juice boxes, bananas, strawberries, bagel, and pretzels and off we went to Anaheim.    LA traffic is always a crap shoot, but thankfully we cruised the entire way down.  As we walked through the parking lot towards the giant red Angel hats placed near the main entrance, he asked if Gogo Berra (aka Miguel Cabrera) was going to hit a homerun.  I told him you never know, but hopefully we’ll see some good baseball.

I originally requested tickets somewhere in the shade knowing we wouldn’t last long in the midday summer sun.  The baseball gods smiled 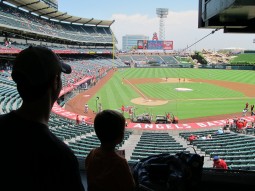 upon us or should I say Neil from the Angels who got us tickets in the Legends suite located behind home plate.  Food, drinks, shade and the amazing view set the bar very high for his first game.  Even with this ideal setup, I still placed the over under at one hour in regards to how long D would last.   Here is a recap of how things went.

12:15 PM – Settled into our seats in time for the anthem including a few fireworks (not enough to satisfy D as he kept asking for more)

1:07 PM – I tried to explain why Big Pappi wasn’t playing because he is on the Red Sox

1:11 PM – D seemed to lose interest in the baseball action and started playing a name game with his mom while sitting backwards in his chair facing opposite the field

1:35 PM – Tigers get a lucky break and string a couple of hits together to pull within one run (3 – 2 Angles after three)

1:45 PM – Bought D his first frozen malt with the wooden spoon with the hopes of buying a few more innings 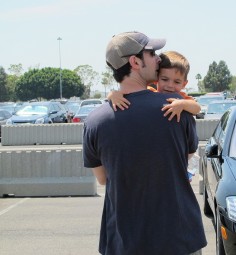 1:52 PM – D looked at me with his chocolate covered face and said “I want to go home now” (Two hours from when we arrived, not too shabby….four innings over and the Angels still ahead 3 – 2)

2:11 PM – Driving on the freeway listening to the game on the radio and Gogo Berra hits a two run homer to give the Tigers the lead (we also missed the 7th inning stretch, but we sang ‘Take me out to the ballgame’ all the way home)

If we ever look back at the box score (Tigers won 5 – 4) years from now, we’ll see Cabrera did hit a homerun.  Derek probably won’t remember either way, but we’ll be able to tell him how much fun we had at his first game.