The sports landscape is evolving before our eyes with the proliferation of smartphones and tablets along with the exponential growth of social media.  This is no longer speculation as the numbers are indisputable.  Over 82 million people (approximately 35% of total mobile phone market) currently own smartphones in the U.S. according to comScore Inc.  The impact on how fans view events, interact with their favorite team or athlete, purchase tickets and engage with other fans is forever changed.  These changes are happening at lightning speed while properties, sponsors and media companies are doing everything they can to keep up. 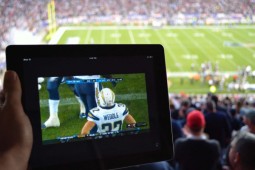 Nielsen’s recent State of the Media: “The Social Media Report” claims four out of five people in the U.S. access social media sites and in May alone Americans spent 53.5 billion minutes on Facebook.   Twitter boasts having 100 million active users with 55% accessing the service via their mobile device.  MLB Advanced Media recently announced over half of all their traffic now comes from mobile devices.  According to Nielsen, about 40% of consumers use social media from their mobile device.  This is also no longer just a younger demographic as the number of older mobile users (55+) who visit social media sites doubled since last year along with the overall purchase of smartphones and tablets.

Fans are not just checking scores or watching highlights, although it is worth noting the  top grossing app on iTunes last year was 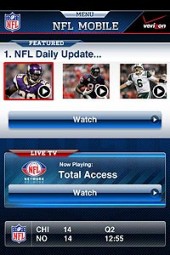 MLB’s At Bat and over 4.5 million people have downloaded Verizon’s NFL mobile app so far this season.  According to Juniper Research, ticket purchases for sports and other events from mobile devices are expected to rise to 15 billion by 2014.  Secondary ticket service StubHub offers a mobile app to purchase tickets on the go and are working with the San Francisco Giants to promote mobile ticketing in the Bay area to their tech savvy fans.  Other teams have offered mobile ticketing for several years with a relatively low participation level, but this will surely change as it becomes more widespread and consumers acclimate to utilizing their mobile device to make purchases on plane tickets, movies and concerts.  This is already common practice in Asia and Europe where they are a few years ahead of the U.S. in mobile technology.

TV Twitter integration, crowd sourcing and location based services will also continue to be more prevalent.  MLB’s use of Twitter with the players at this year’s All-Star game in Phoenix is one of many examples where properties and their broadcast partners are working together to allow fans to join and sometimes steer the conversation while getting unique access from the event participants.  NFL teams like the NY Giants provided on air Twitter integration during pre-season games by showcasing fan Tweets and will continue to do so in the stadium on video boards throughout the regular season.  Before long, this will be as commonplace as the sports ticker along the bottom of the TV screen during broadcasts and the out of town scoreboard at venues.  Other location based services like Foursquare are providing more ways for fans to engage while attending events.  At the recent U.S. Open, American Express offered card members who synced their card with Facebook or Foursquare a $10 credit to their bill when they spent $20 or more on food or merchandise at the event. These opportunities are ideal for sponsors or teams to provide special offers on products, concessions or tickets to future games. According to a recent Duke University study, 249 CMO’s of U.S. companies said they plan on increasing their social media spending from 7.1% of their overall marketing budget to 10.1% over the next year and to 17.5% in the next five years.  When looking at more specific sectors, business-to-consumer marketing is expected to increase to 24% of their total ad budget in the next five years.  In another report, Forrester Research is predicting overall interactive marketing spending to reach $77 billion by 2016 and will be on par with what advertisers spend on TV today.  With digital as the fastest growing segment and this shift in dollars, sports properties and media outlets must adapt.  Throwing in banner ads on the team site, posting a sponsored message on the team Facebook page or sending out a Tweet should no longer be considered throw ins or added value.  These are valuable assets with increasing demand.  What to charge for them is still up for debate, but they are quickly becoming key ingredients to any sponsorship deal and marketing plan.  At the same time, the question of “what can we do with mobile” will be asked sooner rather than later so being prepared to address both will help you stay ahead of the curve.

Jason Klein () is the founder of 88 Marketing and an adjunct professor for the University of San Francisco master’s sport management program. Follow him on Twitter @88marketing.