ESPN to stream conference basketball tournament games on Facebook – In the never ending pursuit of the highly coveted 18 to 35 year olds, ESPN will stream over 200 live conference tournament college basketball games on their Facebook page.  This is further evidence of the “TV everywhere” shift from content providers.  http://lat.ms/AxhDNz Along these lines, a recent study by Havas Sports and Entertainment shows 18 to 35 year olds now prefer watching sports on-line versus TV (36.1% to 32.1%).  http://bit.ly/zA3gXV In the U.S. the numbers are not quite as high, but the signs are there with the growing presence of live streaming games (e.g. NCAA March Madness Live, Super Bowl, etc.).  Forester is also projecting digital ad spending to reach $77 billion annually and surpass TV by 2016. 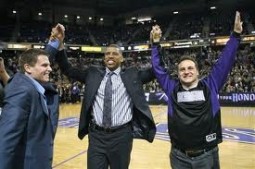 Kings agree to stay in Sacramento – The Maloofs agreed to put up $150 million towards a new arena and committed to keeping the team in Sacramento.  Former NBA All-Star and current mayor Kevin Johnson led the charge on behalf of the city helping negotiate the framework of a deal.  The NBA is said to provide financial support as well.   http://bit.ly/yG3SHh