After attending this year’s SXSW Interactive conference in Austin, TX last month, I learned how the future sports fan experience will be symbiotic with technology and interactive media.  In many ways it already is.  Sports are primed to be a major influence in this sea change due to the inherent traits which are common amongst fans.  The sense of community, the insatiable appetite for information, the loyalty towards their team and early adoption of new technology are all essential ingredients to interactive media.  The following are some highlights from SXSW and what the future fan experience might look like.

Location, location, location… The co-founder and CEO of Foursquare Dennis Crowley shared his vision of how users will be able to receive valuable information, which serves a utility other than just retail offers or points tied to some form of Gamification function. 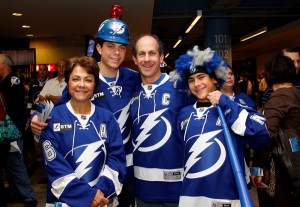 Mobile GPS, RFID and NFC technology will drive this and become more widespread once issues like battery capacity and venue infrastructure are resolved.  Imagine showing up at a game and your phone lets you know who else is there within your network, what concession stand line is the shortest or offers the best food based on your preferences, where you should park or go for a bite to eat after the game.  This will not require a ‘check-in’, but will rely on tracking your location and then intuitively provide information based on your history, other users input and thousands of other data points.  The Tampa Bay Lightning are already utilizing this technology to some degree, but instead of using phones they incorporated an RFID chip into special jerseys sold to season ticket holders.  Fans wearing this jersey simply flash their arm over a scanner at concession and merchandise stands and receive discounts.

Anyone up for apps… Teams, leagues and media properties are scrambling to launch apps for their fans with varying degrees of success.  One idea from Jacob Turner and Richard Ting from RGA who led the panel on the Sports Fan in 2015 is to offer a dedicated app just for season ticket holders.  This app could allow season ticket holders to swipe their mobile device as their ticket upon arrival at the turnstiles, receive a welcome message while at same time ask if they would like their usual food order sent to their seat.  It may also automatically check them in across their different social networks, provide access to stats, allow them to bet on in-game events, identify which of their friends are in attendance and where they are sitting.  Some of these components are available now in one form or another.  However, in the future they may all be seamlessly integrated and require very little effort from the user.  To the horror of most team PR personnel, this panel also boldly imagined a postgame press conference available in Google+ Hangouts where the media asks questions for the first half and then fans ask questions directly to the athletes or coaches during the second half.  As teams look to offer more value to their best customers, this might not seem so crazy after all. 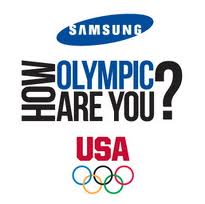 6 degrees of separation… Mathew Moller from Samsung spoke about their Olympic Genome project which utilizes a Facebook platform and allows users to see how they may be connected to the Olympic and Paralympic athletes.  In addition to forming a connection, fans will see the athlete’s pursuit to making the team along with their experience in London.  The USOC hopes this will help peak interest in some of the less popular sports as fans form an interest through their connections to the athletes and their stories.  This seems like a great idea for other sports to emulate to help strengthen the bond with the team and learn about the players.  Baseball could use this as a way for fans to connect with minor leaguers as they make their way to the big leagues.  The same opportunity is there for any sport looking for ways to deepen the bond with fans and peak interest.

While listening to a wide range of pioneers in interactive media speak, it is clear there will be a mad dash just to keep up with the growth of new platforms, social networks and technology seemingly appearing out of nowhere.  Regardless of the latest technology, one thing consistently stands out.  Content is and always will be king.  How we access it, who distributes it, who owns it and how it is consumed is what is changing at lightning speed.  Keeping up with the pace and even trying to get ahead of the curve is the challenge.  Finding ways to utilize the newest technology or hot new social network to provide value to your fans or customers and help drive business is crucial.  Some properties and brands may be reluctant to break away from the traditional ways of doing business, while others will adapt and even lead the way.

Jason Klein () is the founder of 88 Marketing and an adjunct professor for the University of San Francisco sport management program. Follow him on Twitter @88marketing.