There is not a one size fits all solution when it comes to activation.  A lot depends on the marketing objectives of the sponsor and available assets.  Sponsors and properties alike are often looking for good ideas on how to make their deals work for them.  Here is a look at what a couple of brands recently did to support their sponsorships.

American Express at the U.S. Open: 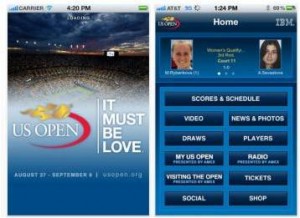 AMEX’s sponsorship of the U.S. Open illustrates a true integrated approach designed to reach their customer base with multiple touch points surrounding the event.  First, customers who synced their AMEX cards with Facebook, Twitter & Foursquare received an automatic $10 credit with a $20 purchase at the event along with special offers (e.g. $50 Ralph Lauren gift card) from third party sponsors.

AMEX sponsored ‘My US Open’ in the official US Open app featuring an interactive map, USOpen.org radio feed, video content with players as well as offers for AMEX card members.  The feed to USOpen.org Radio included the “Courtside Q&A” feature where fans could submit questions via email or Twitter for the chance to have them answered by tennis insiders. 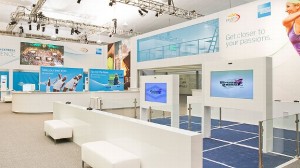 AMEX also partnered with the USTA to support the Fresh Courts philanthropic effort that invests in developing communities through the renovation of existing tennis facilities.  Fans could tweet the name of their favorite player using #GoNextContenders and AMEX donated $1 per tweet — up to $50k.

Herbalife and the La Galaxy: 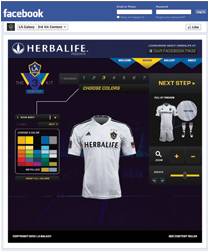 Herbalife who is the jersey sponsor for the LA Galaxy found a unique way to engage with their fans using social media.  Together they created a Facebook app where fans could design a third kit or jersey for the team to wear next season.  The results are quite impressive when you consider the seven steps required to participate.   This runs contrary to the idea of keeping things as easy as possible in order to generate the most activity.  However, the allure of fans being able to influence what the team actually wears on the field and the simplicity of the app made this a huge success.  Thousands of fans submitted an entry with the average person spending close to 9 minutes each.  The winner also received a trip for two to see the team play in the uniform along with a team signed jersey.