Q&A with Bryan Srabian from the SF Giants 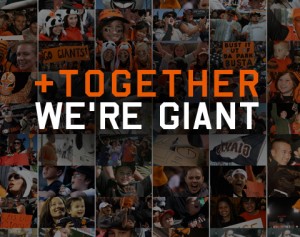 What social media initiatives did you try this season that worked well?

We really expanded our social media efforts across multiple platforms this year including Pinterest, Tumblr, Google + and Instagram.  All of this fell under the umbrella brand message of “+ Together We’re Giant”.  This is an ongoing initiative where we want fans to feel like they are part of the team.  We are crowd sourcing stories and content about their Giants experience in a variety of ways.  Everything we did was also much more integrated into our overall marketing efforts.  In previous years social media sometimes lived on it’s own.

Specifically, Instagram really took off and showed tremendous growth for us.  Photo sharing is becoming very popular so it makes sense.  It is a young and active core group of our fans.  Pictures are a great way to tell the story and help people connect to live events.

We are also very proud of our fans participation and support of the All-Star balloting process where social media played a significant role.  As a result, four Giants were selected to the team.

Is there anything you tried that didn’t go very well?  If so, what and why?

Nothing outright failed, but there are definitely a few things we haven’t figured out yet.  Namely, Pinterest and Google +.  We have close to one million followers on Google+, but the engagement is just not there yet.  Part of the problem is a lack of time to put into every platform equally.  The other aspect is one size does not fit all.  What works on one platform may not work on another.  The key is figuring out who is on it and how they are using it.

What did you notice another property or sponsor doing outside of the Giants that caught your eye?

The LA Kings did a great job with Twitter during their Stanley Cup run.  They did a lot of the little things I appreciate as someone who does this for a living.  They took on a personality, engaged with the fans, pushed the envelope and took chances.  They were also quick to respond to the fans and really capitalized on the excitement surrounding the team.

The NY Football Giants ran a very cool promotion following the Super Bowl where fans could try on a virtual championship ring and post on Facebook.  Both of these examples are tied to winning championships, but there are events throughout the season with any team that you can build around with a good idea and ability to move quickly.

What’s on the horizon for the Giants social and digital efforts?

We are constantly asking ourselves what we can do differently.  I’m really focused on furthering the engagement with fans at the game. We have 40,000 fans a game in attendance who are all on their smartphones so what can we do beyond our current efforts to enhance their experience along with fans watching at home.

What trends are you watching?

Mobile, mobile, mobile… Mobile is now the first thing I think about.  I ask myself, “How will this work with mobile?”.  Then figure out the rest.  We live in a world of short attention spans and everyone is on their smartphone.

Bryan Srabian is the Director of Social Media for the San Francisco Giants.  You can follow him on Twitter @srabe