As we head into a new year, here are a few sports business stories worth keeping an eye on. 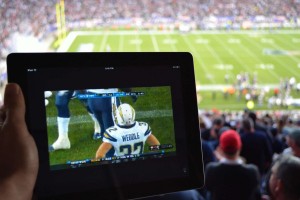 Mobile will continue to grow and dominate the new media conversation.  Advertising dollars are shifting towards mobile and some analysts predict it will surpass on-line as soon as 2014.  (eMarketer estimates U.S. mobile ad spending to hit $6 billion by 2014)  Mobile commerce and payments will become more prevalent as consumers adopt new purchasing habits.  Starbuck’s mobile payment app and others like it are so easy to use, it is just a matter of time before consumers will come to expect and want to use their digital wallet for other purchases.  Forrester Research predicts mobile commerce to grow from $10 billion in 2012 to $32 billion by 2016.  Whether it’s via a customized app for  a smartphone or tablet or an optimized mobile site, sports properties will need to keep up.  All of these examples point to the in-game experience as venues make strides to retrofit their Wi-Fi and cellular infrastructure to support the demand.  For several years now, teams and leagues have had to deal with the challenge of losing attendees to the in home HD viewing experience.  If fans can’t easily engage with social media, watch replays and make purchases while at the game with their mobile device, they may agree with the notion that watching on TV is better than being there.  Thankfully, most teams are keenly aware of this situation and are actively searching for or implementing solutions.  How sponsors help enhance this aspect of the fan experience and provide value will be critical to their success as well.

The potential sale of AEG

After the record sale of the Los Angeles Dodgers in 2012 ($2.1 billion) for more than double the previous sports franchise sale price, what will one of the biggest sports and entertainment companies in the world fetch on the open market and who will emerge as the new owner?  AEG owns the LA Kings and LA Galaxy along with part of the LA Lakers and Houston Dynamo.  They also own or operate over 100 venues throughout the world including  Staples Center, LA Live, Home Depot Center, O2 Arena in London and the potential new NFL stadium in LA (Farmers Field).  In addition, they are one of the largest concert promoters in the world.  Rumors regarding potential suitors include Dr. Patrick Soon-Shiong who is the wealthiest person in LA ($7 billion) and recently bought Magic Johnson’s 4.5% share of the Lakers in 2010.  He was also mentioned as a potential bidder for the Dodgers last year. Guggenheim Partners, the group who ended up purchasing the Dodgers and Dick Clark Productions in a separate acquisition in 2012 are considered yet another candidate.  The new Dodger owners are in the process of negotiating a TV deal, which may include part ownership in a regional sports network so adding a sports and entertainment giant like AEG may be the next phase in their overall strategy.  Larry Ellison, the third wealthiest man in the U.S. and head of Oracle is another name mentioned.  If or when this sale takes place, it will definitely make a big splash and alter the sports landscape moving forward.

Impact of the NHL Lockout

Now that the NHL lockout finally appears to be over, how much damage will need repaired and how long will it take?  After the last work stoppage, hockey clawed its way back and then reached new heights in regards to revenue, sponsor involvement and attendance.  Since the 2004-05 lockout the NHL has nearly tripled revenue and last year generated an estimated $3.2 billion.  TV ratings grew and the league signed a new 10 year $2 billion deal with NBC.  The 2011 Winter Classic was the most watched regular season game in the U.S. in 36 years.  This all added up to 7 straight years of significant growth.  Unfortunately, this was not enough to prevent this most recent work stoppage.

In hockey close to half the revenue comes from ticket sales, which is proportionately much higher than the NFL, MLB and NBA who receive significantly more TV revenue.  Even with the new TV deal, hockey will still rely on ticket revenue to carry the teams.  After the ’04-’05 lockout, 25 of the 30 teams saw an increase in attendance the first year back.  Hockey boasts some of the most diehard and loyal fans in sports so the majority will probably return again although there is no way to make up for the loss ticket revenue from canceled games thus far.  The casual sports fan probably didn’t miss it too much in the first place.  Many existing sponsors may have missed the window to do much activation this season and will look to next year to support their commitments.  Teams will do their best to offer make goods and extensions to prevent further losses.  In some cases, prorated refunds or payments may apply.  Potential new sponsors may have moved on.  Hopefully with this new labor agreement, there will be long term stability and the league will again prosper after it digs itself out of the hole from this season.

Jason Klein is the founder of 88 Marketing.