What’s the Name About? 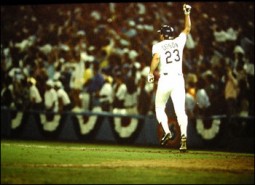 88 Marketing is in honor of the 1988 World Series and one of the most memorable moments in baseball history. As a kid in Detroit I watched Kirk Gibson help lead the Tigers to the 1984 championship. I moved to Southern California at age 13 and a couple of years later Gibson signed with the Dodgers as a free agent. In 1988 Gibson lead the Dodgers to the postseason while winning the regular season MVP award in the process. After a tough fought battle with the NY Mets in the NLCS, the Dodgers prevailed and ended up in the World Series against the powerful Oakland A’s.

Gibson’s gritty play during the NLCS left him badly injured with a pulled hamstring on one leg and a sprained knee on the other. He was not in the starting lineup for Game 1 on October 15, 1988 and wasn’t likely to play the entire series.

“In a year that has been so improbable, the impossible has happened”…Vin Scully

My best friend’s dad got us tickets and drove us up from San Diego to the game. We sat in the Top Deck with binoculars in hand. As the game entered the bottom of the 9th inning, the Dodgers trailed 4-3. Dennis Eckersley, baseball’s best closer and future Hall of Famer was on the mound for the A’s. Mike Davis drew a 2 out walk and that is when we saw Gibson limp out of the dugout onto the field to pinch hit. He worked a full count after fouling off pitch after pitch. You could see he was in pain and could barely move his legs. On the seventh pitch, he lunged forward and slapped at Eckersley’s backdoor slider pulling it into the right field bleachers for the game winning homerun. He hobbled around the bases pumping his fists in the air as the crowd went crazy. We stood and cheered for a good 45 minutes before finally leaving the stadium. The Dodgers went on to win the series 4-1 and Gibson didn’t get another at bat.

To this day, besides getting married and the birth of my son (Derek Gibson Klein), it is one of the best moments of my life.